February 15, 2011
Sometimes it's the simple things in life that are the best.  Like French bread pizza.  So quick and easy to put together.  And yet so good.  I had originally planned on making homemade pizza for supper on Monday, Valentine's Day.  But it was Monday.  Who had the bright idea to make Valentine's Day on a Monday?  I mean, seriously. 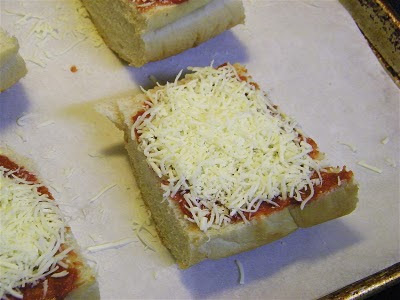 So, when I made a quick grocery store run earlier in the day I bought a loaf of French bread and decided we would go that route.  And get this, the bread was the only thing I had to buy.  Everything else was already in my pantry or fridge.  That means this meal only cost me 95 cents.  That's right.  Less than a dollar...if you only count what I had to buy yesterday.  :)  Even so, counting everything I used for it, less than 10 bucks, easy.
Random, but the bread came off the "day old" cart.  My mom used to call that the "used bread".  Honestly.  And the bread thrift store?  Yeah, the used bread store.  Anyway... 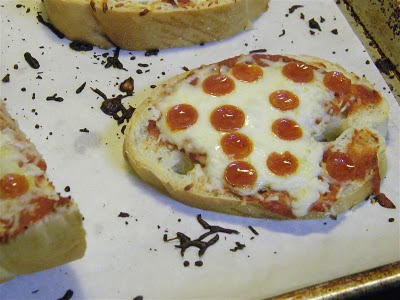 I like to split the loaf in half lengthwise, but the kids like it sliced, so I did a little of both.  I whipped up some of my favorite pizza sauce, spooned that on, added some cheese and toppings, and baked in a 450'F oven for about 6-7 minutes.  And ta-da!!  Supper!

Christi said…
Used bread...hahahahahahaha. Awesome!
Wait- what did my family eat on Valentines Day- I had class, Grayson had basketball game. hmmm- this week has been a blur.
February 18, 2011 at 2:06 PM

Anonymous said…
YUM. Sometimes I'm such a kid.... the simpler the better and this sounds like the perfect treat for me. LOVE it! Thanks for sharing at Saturday Swap!!!
February 20, 2011 at 6:42 AM