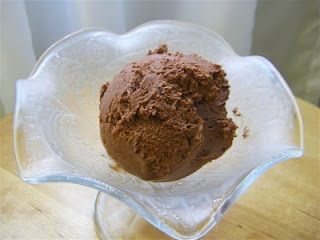 Chocolate.  Ganache.  Ice.  Cream.  I'll just get right down to business.  This stuff is amazing!!
Katrina of Baking and Boys! chose this week's Tuesdays with Dorie recipe.  She has my wholehearted gratitude.  ;)
Chocolate ice cream is probably my favorite when it comes down to it.  Or really good chocolate ice cream, that is.  This particular recipe starts out by making ganache, which is a French term for a smooth mixture of chopped chocolate and heavy cream.  I have to confess, I'd never actually made ganache before trying this recipe.  I can say, it's super easy!  You put your chopped chocolate in a heat-proof bowl (I used Ghirardelli bittersweet chocolate).  Next you bring some heavy cream to a boil and pour over the chocolate.  After letting it sit for a couple of minutes, you start stirring and are rewarded with a beautiful, glossy, bowl of chocolate bliss.  Not that I stuck my {clean} finger in for a taste or anything.
For the record, I had a hard time keeping the Munchkin out of the chocolate while I was chopping it for the ganache.

This recipe also calls for making a custard, which you then add to the ganache and chill in the refrigerator before churning in your ice cream maker.  It only calls for 4 egg yolks, which is not bad, since I've seen recipes that use many more than that.  I don't usually mess with recipes that call for a custard, because I tend to not have the time.  My thinking has since been changed!  The custard really came together quite quickly and without too much trouble.  Just as I was pouring it into the ganache, the baby woke up from his nap, so that was great timing at my house!

After chilling in the refrigerator, it truly is pudding-like.  At first I was worried that it wouldn't freeze properly, but it did.  I was sure to share the privilege of licking the almost empty bowl of custard with the Munchkin.  {This is the kid that won't eat pudding...seriously.  I guess if you make it with good quality ingredients, it's a different story.  I don't like the box mix pudding either.  blech.  My apologies if you love the stuff.}
My poor little ice cream maker had a mishap during the process.  The lid tumbled to the floor and broke.  I'm not sure who was more distraught at the thought that we wouldn't be able to make the ice cream - me, or the Munchkin!  But, it was still usable, thank goodness!  I have since ordered a replacement lid.  Whew!  {for the record, I've also discovered through reading that some of the other TWD bakers just placed the custard base in the freezer, and stirred every hour or so.  This is apparently a method that David Lebovitz talks about.} 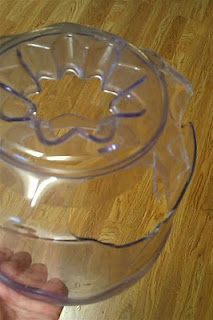 While it was in the machine, the Munchkin said to me "what if we chop up some more of the chocolate and add it in?"  I have to admit, I had already planned on doing this, but I let him think it was completely his idea.  It was definitely a good one.  We used about one ounce of Ghirardelli semi-sweet chocolate.  Straight out of the ice cream maker, it was like thick soft serve.  After storing it in the freezer for about two hours it was perfect.  Not super soft, but not too firm either.  A few more hours and it was frozen solid.  That's what happens when you use a good quality chocolate.  No worries, a few minutes on the counter will soften it right up! 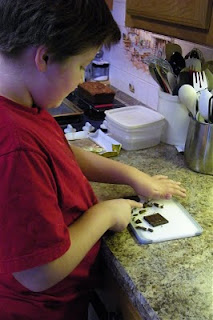 I loved this chocolate-chocolate chip ice cream.  It's probably my new favorite recipe.  The Munchkin {despite all the chocolate sneaking and bowl licking before} took a few bites and was done.  His favorite ice cream has always been plain ol' vanilla.  D said it was probably the best chocolate ice cream he'd ever had, but it was way too rich for him.  The Sprout, well, he loves just about anything, and gobbled it up.  I wish I'd taken a picture of him with ice cream all over his face!
If you would like the recipe {and you should definitely try it!} be sure to check out Katrina's post.  And stop by and see what the other TWD Bakers did with this week's selection!
Enjoy!  :)

Katrina said…
First of all, I love your serving dish.
Bummer for the broken ice cream maker lid. Seems like the ice cream maker would still work without it.
Your ice cream looks great.
Thanks for churning along with me this week!
August 10, 2010 at 1:47 PM

Amber Marie said…
This looks great! Sorry about the lid - it looks just like mine. Good to know you can order replacement lids.
August 10, 2010 at 1:53 PM

Shandy said…
What a great scoop of chocolate ganache ice cream! and cute serving dish. Glad you found a replacement for your ice cream lid and were still able to churn the ice cream out. YUM!
August 10, 2010 at 3:22 PM

Paula said…
I absolutely love the dish you used in the first picture. Is it a family heirloom or something you obtained recently? (In other words, is it something I could go to the store and buy?)
August 10, 2010 at 8:00 PM

Katy said…
Thank you all for the comments!