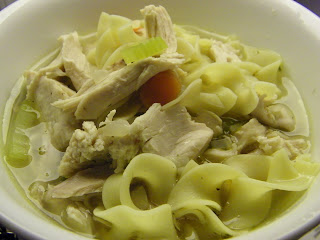 I know what you're thinking. Chicken noodle soup, in July, in Texas. You're thinking I've lost my mind. Well, that is debatable, especially if you ask D... But no, it was chilly and rainy on Wednesday, and chicken noodle soup just plain sounded good!
To top it off, I recently found out about a group called Tyler Florence Fridays. Everyone makes different recipes, either from one of Tyler's books or from his recipes available on the web, posts about it, and a roundup of the week's posts are then made. So, deciding to join in on the fun, I searched for a recipe for chicken noodle soup, and found one on the Food Network's website. The original recipe can be found here. It was actually from an episode of Food 911...I miss that show! :)
Let me also remind you that nothing is ever easy at my house. What should have taken only a few hours (we were making our own stock, you know) in reality took all day. Why, you may ask. Well, I didn't even start making the stock until noon. Got that on the way, well mostly (minus a few ingredients I didn't have, more to come on that shortly) and then I realized it was time to pick Sean up from science camp. I got everything chilled down and into the fridge. Once the kids and I got back home, my mom came over to help deliver D's car to his office (long, long story). Made it back home again, and then I could resume making the soup. By this time it's about 5:00 p.m. and the kids are hungry. We didn't actually eat until close to 7:00 p.m. Seriously. This is what I mean by nothing's ever easy around here.
Now, let's talk more about the recipe itself. It starts out simply - rinse and de-gibletize your (preferably free-range) chicken and place it in a pot with water, vegetables and herbs. When I got the notion to make soup, I did a quick survey of the fridge and pantry to see what items I had on hand. I did indeed have a whole chicken thawed in the fridge, which was a miracle because I don't usually buy whole chickens. However, I'd been planning to butterfly and grill it, but that would just have to wait. Soup was calling. I have no idea if it was free-range or not, but I do know that it was a Texas chicken. The label said so. It was also already giblet-free. Kudos for that one, to whoever helped me out there. :)
I was missing the turnip and fresh thyme called for in the stock (imagine that...being out of thyme...bwahahaha...okay, so you can now agree with D that I am *not* a comedian, nor do I even come close). I did have some dried thyme on hand so I went with that. I also didn't have any celery. But I can indeed tell you that the stock smelled quite wonderful while cooking.
By the time I got started on the soup itself, I had stopped on the way home to grab some celery. Wish I'd thought to grab some fresh thyme, but oh well. Such is life. I got the fresh veggies prepared and cooked until softened, then added the stock from earlier. I had initially planned on making homemade egg noodles, but quickly regained my sanity and used the dried pasta noodles that I had in the pantry. I added those and the shredded chicken and let it simmer away.
I thought it was very good. Although I wish I'd had the fresh thyme. I think it would have punched up the flavor a bit. Sean did actually try it (well, technically he ate the chicken, some broth and some noodles...the veggies were carefully avoided). On the other hand, Kade mostly ate carrots. I didn't expect anything different.
This recipe will be going in my keeper file, though it probably won't see the light of day again until the middle of winter. :)
Enjoy!! 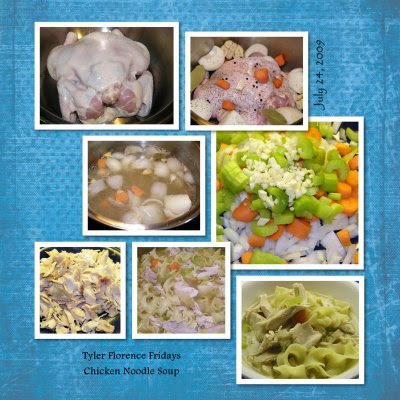 Deb in Hawaii said…
Welcome to TFF--nice to have you with us. I love soup and eat it all year round. Great picture-it looks really good!

Tammy said…
Lovely post- and I laughed at your joke! ;) I am making TF Chicken Noodle Soup this week, too. (There's nothing like hot soup in July...)I actually have a completely different recipe- with meatballs in it- I found on food network. It'll be interesting to see how they compare.
July 25, 2009 at 7:37 AM

Anonymous said…
That sounds like dinner here too! Even without kids and in-laws I can lose a good portion of time in the kitchen! Lovely soup! Lucky you...rain in July!
July 26, 2009 at 12:44 PM

Kristin said…
Coming over from TFF, and I have to agree with everyone about this happening over here too! I didn't know it was possible to have chilly days in a Texas summer. Glad you liked the soup & welcome to TFF!
July 26, 2009 at 2:22 PM

Ty'sMommy said…
You know, there are not many foods that are more satisfying and comforting than a nice bowl of chicken noodle soup. I don't care if it IS July! Great job!
July 27, 2009 at 10:54 AM

Jenny said…
When life hands you chicken, you make whatever you think you can get you kids to eat with it! I so understand this.
Welcome to TFF!
July 28, 2009 at 6:32 AM 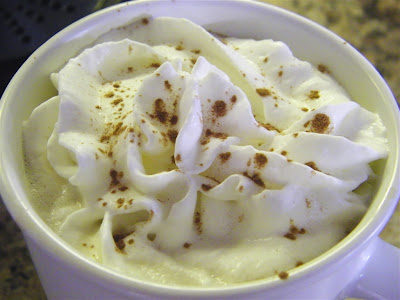