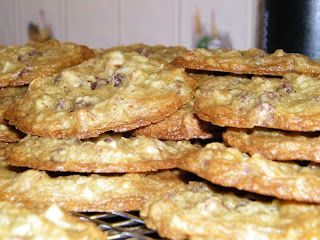 Several times over the last few months I've run across posts mentioning Operation Baking GALS. I'd even bookmarked the website. Well, a few weeks ago I stumbled onto this post from April at Wine Lover's Cooking Diary asking for people to join her team. I don't know April, or her brother, but something told me to sign up. I just had to.
Here is a little excerpt talking about what Operating Baking GALS is:

Baking GALS (GALS stands for Give A Little Support) is a group of volunteer bakers who bake and ship homemade goodies to our heroic troops that
are currently deployed. Each soldier is “Hosted” by a blogger, and potential bakers are “recruited” from the bloggers own site as well as the GALS site. Each Host recruits between 20-25 bakers, meaning LOTS of goodies get delivered to our soldier…so many, in fact that he or she has plenty to share with their fellow troops!

Why do we do it this way? Why not just ship to “Any Soldier”? Well, we don’t know “any soldier” – and “any soldier” doesn’t know us. And receiving baked goods from a stranger, while probably safe, is frowned upon and in many cases, those Any Soldier gifts could be thrown out. Baking GALS will introduce you to a soldier. You will know his name, a little bit about him, maybe even his favorite cookie…and he will know in advance that he will be on the receiving end of a cookie bombardment – so everyone is prepared. It is a safer way to treat our troops, and it helps them to know when to expect a barrage of goodies.

I was supposed to have everything mailed out yesterday, the 11th. Well, unforeseen circumstances preventing me from baking on Friday like I had planned, so I'm baking today -- chocolate chip cookies ramped up with pecans and coconut. Yum. I don't know if it was the outside temp (97'F) or my oven, but they didn't bake up quite has pretty as I was hoping for. Kade, my taste-tester approved though. (Hey! I have to make sure they are acceptable to send to our troops, right??) 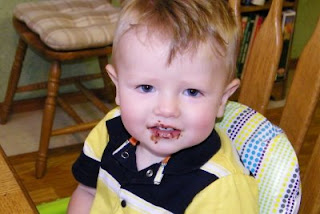 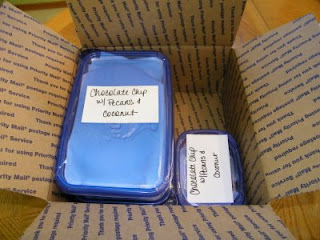 Packed up in the containers... 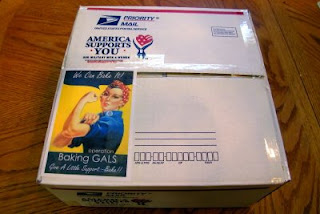 Taped up and ready to go except for labels and forms! Hopefully they will arrive relatively unharmed. ;)

Christi said…
That is a great idea! I told Grayson about this and he said "How are they going to eat cookies while they are fighting" Missing the point here, buddy!
July 13, 2009 at 10:40 AM