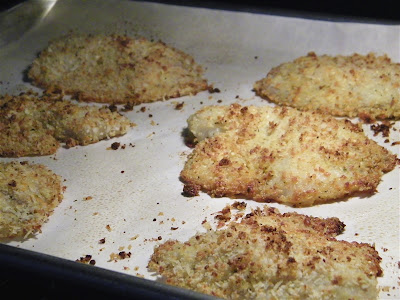 First off, I have to tell you something you may or may not already know.  I have a trouble-maker.  Yes; yes I do.  Do not let his cuteness factor fool you.  He is a bona fide trouble-maker.  He's either going to turn my hair gray, make me pull all my hair out, or possibly both.  We're talking about the Sprout here. 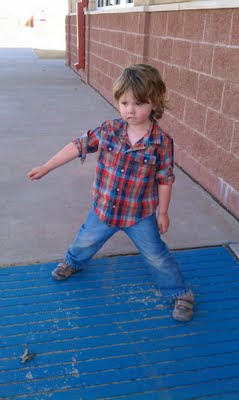 This shirt says it all. 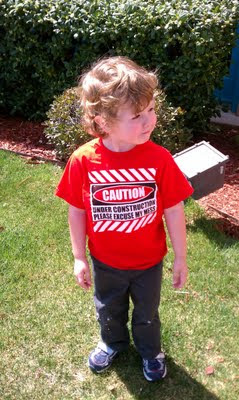 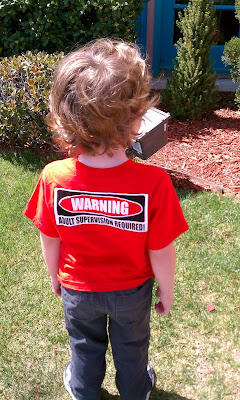 So, yeah.  I had visions of much, much badness.  I even went to the garage and flipped the breaker for the oven to see if that would somehow reset it so the door would unlock.  Nope.  Luckily, the oven cooled off enough in a few minutes that it did actually unlock and I was able to rescue our dinner.  Sheesh.  That kid.

The fish, despite the near disaster, received two thumbs up from my family.  The Munchkin ate half of his before asking for ketchup, then he finished it and ate half of another piece!  The Sprout ate his after we called it fish sticks (really?).  And D double-checked to make sure I had written down all my notes for the recipe, because he said he was going to request it often!

Preheat the oven to 400'F.  Line a baking sheet with parchment paper.

In a shallow dish or pie plate mix together the bread crumbs, cheese, and spices.  In a separate bowl or plate, drizzle the tilapia with the olive oil, coating well.  One piece at a time, place the tilapia in the bread crumb mixture, turning to coat.  Place on the prepared baking sheet and bake for 12-15 minutes or until done (it will be white all the way through).

Hope said…
Yum!!! And totally cracking up with 3 boys and a diva that could have totally happened at my house..my lil L is a born pitcher and throws whatever is on his tray so a good meal that isn't tossed at a sibling or the floor would be great!
April 20, 2011 at 10:24 PM