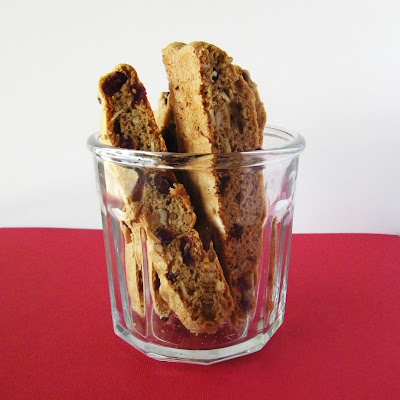 Hey everyone!  Well, my back is feeling better.  I want to thank everyone for the well wishes!  I'm still exhausted and behind on everything, but isn't that always true?

Just as promised, I have two recipes to share this week.  One is a new one for me, and one is a long-time favorite.

The new recipe is Cranberry Almond Biscotti.  This is only the second time I've ever made biscotti, and the first time I've made it from scratch.  After reading the recipe, I thought to myself "I can mix this by hand; no need to get out the mixer!"  Well...yes and no. It came together, although for a minute I thought it wasn't going to.  But next time, I'll just use the mixer.  The recipe came from an old Taste of Home book.


I've read, though I honestly can't remember where and can't attest to either my memory or the accuracy of the following statement, that traditional biscotti is made with no fat other than eggs, and that biscotti without butter keeps longer.  Take it for what it's worth.  :)  I'm a biscotti fan, and these were good.  I enjoyed one (or two) the next morning with my coffee.  And I may have nibbled away on a couple while they were still cooling...
Cranberry Almond Biscotti
2 1/4 cups all purpose flour
1 cup sugar
1 tsp baking powder
1/2 tsp baking soda
1 tsp ground cinnamon
1/2 tsp ground nutmeg
2 large eggs
2 egg whites
1 Tbsp almond or vanilla extract (I used vanilla)
6 oz sweetened dried cranberries

In a mixing bowl, combine dry ingredients.  In a separate bowl, whisk together eggs, egg whites and almond extract.  Add to dry ingredients and beat on medium speed just until moistened.  Stir in dried cranberries and almonds and mix thoroughly.


Turn batter out onto a floured surface (batter will be thick and sticky).  Divide dough in half and, with lightly floured hands, pat each half into a log approximately 14 x 1-1/2 inches.  Place on baking sheet and bake for 30 minutes.  Remove from oven and reduce heat to 300'F.  Cut biscotti into 1/2 inch slices and stand upright on the baking sheet.  Return to oven and bake for an additional 20 minutes.
Let cool completely on wire racks.  Store loosely covered. 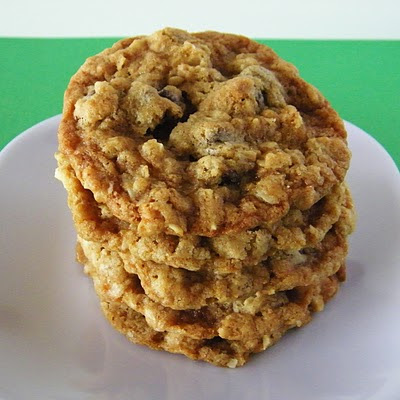 The next recipe I'm sharing is one that I received several years ago from a friend.  A group of us exchanged recipes around the holidays, so I've always associated this recipe with Christmas.  I've included it in gift tins several times and it always goes over well.
It was a big hit this time around too.  Here's the funny thing: even the Munchkin liked them this time!  Usually, he won't try them. But they were sitting out cooling, and he says "can I have a cookie?" "Sure!" I respond. I figure he's going to take one bite, give me "the look" and say he doesn't like them.  Nope.  Ate the whole thing, and told me they were the best cookies I make.  Who is this child?  Oh well, my picky eater returned the next day when I tried to get him to eat a dreaded vegetable.

I did not try to freeze any of this dough.  I made the whole batch and sent most of them to my person for Operation Baking Gals.

In a separate bowl, stir together flour, oats, baking soda and salt.  Add to butter mixture, beating until blended.  Stir in toffee bits, chocolate chips and almonds.  Drop by tablespoonfuls onto prepared baking sheets.  (I use a #40 disher.)

Bake in the center of the oven for 8-12 minutes (mine were done at about 10 minutes; don't over bake) or until lightly golden.  Cool for 5 minutes on baking sheet, then transfer to a wire rack to cool completely.

Pam said…
I love toffee so I know I would love these! Biscotti is fabulous, too! How exciting - a twofer post! Thanks for sharing them both!
October 15, 2010 at 7:37 AM

Megan said…
A good biscotti is always appreciated but the Toffee Chocolate Almond Crunchies would make my daughter a very happy girl!
I'm glad your back is better and do we ever really get caught up?
October 15, 2010 at 10:04 AM

Sue said…
Thanks for the great recipes! They both look delicious! I've only made biscotti once, but plan to try again this holiday season. Yours look wonderful!
October 15, 2010 at 10:06 AM

Lisa said…
Your son's endorsement on the cookies is a good enough recommendation for me. As for the biscotti, I've made them with butter many times and they last for weeks.
October 15, 2010 at 10:48 AM

megan said…
I made biscotti this week too - and I do remember hearing/reading about the authenticity of butter/no butter, eggs/crispness etc.

amanda @ fake ginger said…
Mmm, both cookies look fantastic! I've never heard that rule about biscotti but now that I think about it, it does make sense.
October 18, 2010 at 8:15 AM

Anonymous said…
I've really enjoyed reading through your recipes. This Biscotti recipe will be a perfect gift to send my mom ~ she loves Biscotti. Such great recipes and I love the 12 weeks of Christmas cookies idea.... Just can't believe it's already that time of year. :) PS ~ As for your most recent post.... I missed my daughter's field trip bc I was at the doc with Daddy.... We all felt bad. Tomorrow is a new day though. Make tonight great and hoping to get time to relax {for both of us "super" moms}! :)
November 3, 2010 at 7:38 PM

Anonymous said…
I just added your website on my blogroll. I may come back later on to check out updates. Excellent information!
August 7, 2011 at 11:26 PM