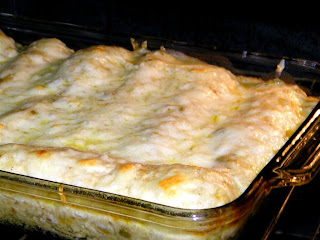 We love Mexican food at our house.  Well, Tex-Mex.  Er, Tex-Mex that you get around here.  See, in Texas, there are about as many different styles of Tex-Mex as there are restaurants, and what you get in North Texas won't be the same as what you get in South Texas, or anywhere else for that matter.
Our favorite Mexican restaurant is a locally owned place (dive?) that we've been going to for years.  They've seen our family grow larger, and we never need a menu when we go in.  This place cooks with a lot of green chiles, and enchiladas with green sauce tend to be my favorite.  This isn't exactly an attempt to replicate a particular dish there, but rather a combination of some of my favorite things!


For some reason, I tend to prefer making chicken enchiladas with flour tortillas instead of corn.  The flour tortillas soak up the sauce and almost puff up during baking.  While you can definitely use store-bought tortillas for this recipe, try getting some from a local tortilla factory if at all possible.  Or you could certainly make your own, which brings me to a funny story.
The Munchkin, my 8 year old, is taking a class at a local museum this week, called the "Taste of Texas".  Yesterday they just happened to make their own tortillas in class.  We actually did this at home when he was younger, but not lately.  I've been slacker-mom lately, with the two little ones around, when it comes to doing fun stuff and getting them involved in the kitchen.  I've resolved to do better with that...  But, anyway, back to the story!  When I stopped to pick up some tortillas on the way home, he said "but you haven't even tried the one I made yet!"  He was quite offended that I was buying tortillas.  It was really quite cute.  I explained that I needed more than one for the enchiladas, but I was certain his was good and we'd share it after supper.  And you know what?  It was really quite good.  He gets tortilla making duties from now on!
Green Chile Chicken Enchiladas


Heat the oil in a large skillet over medium-high heat. Add the onions and garlic and saute until the onions begin to turn translucent. Add the enchilada sauce, chopped green chiles, cumin and chicken stock. Bring to a boil. Season both sides of the chicken breasts with salt and pepper, then add to the pan. Cover, reduce heat, and simmer until the chicken is cooked through, about 30 minutes.
Meanwhile, preheat the oven to 400'F. Coat a 9x13 inch baking dish with cooking spray.

When the chicken is done, remove and shred with 2 forks.


Mash together the softened butter and flour to make a smooth paste. Add to the sauce in the pan. Raise heat to medium and cook until thickened, stirring occasionally, 5-10 minutes. Reduce heat to low, add the sour cream, and stir until heated through. Remove from heat.
In a medium bowl, combine the chicken, about 1/3 of the grated cheese (just eyeball it), and 1/2 cup of the green sauce.
Pour about 1 cup of the sauce in the prepared baking dish, just enough to coat the bottom of the dish with a thin layer. Spoon some of the chicken mixture evenly down the center of a tortilla (they will be full -- I like substantial enchiladas!). Tightly roll the tortilla around the filling and place seam-side down in the baking dish. You may need to warm the tortillas slightly in the microwave to get them pliable enough to roll without tearing.

Cover the enchiladas with the remaining sauce* and sprinkle with the rest of the cheese. Bake, uncovered, until the sauce is bubbly and cheese is melted, 15-20 minutes. Remove from oven, and top with freshly chopped cilantro, if desired.

*I had some extra sauce. You don't want to overfill the baking dish; you want to add just enough to come approximately half-way up the sides. I added my extra sauce to some leftover plain cooked rice and heated through. Very good!