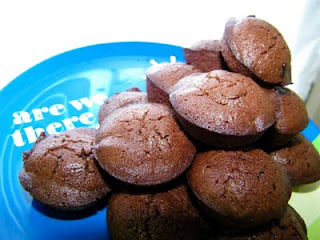 And I couldn't keep him out of them! Well, we all thought they were great. My parents were over for supper again (a Tuesday thing at our house) and my dad and I agreed that I should have put a pecan half on top of each brownie before baking. I'll try that next time.

It was a bit chaotic in my kitchen tonight, so I didn't get any pics of the process, but I will say that these brownies were simple and quick to make. The only thing I did differently than the recipe was that instead of melting the butter, chocolate and brown sugar on the stove, I did it in the microwave! It seemed to work just fine.
My only complaint about this recipe (and the only complaint I heard from anyone else) was that it didn't make nearly enough. Sixteen mini brownies just isn't going to cut it at my house!! :)

Be sure to check out what everyone else did with this week's recipe!

Katrina said…
I'm a total believer in nuts with my brownies. But I'd probably just make them (loved the KH Tribute brownies better) in a pan next time.
August 14, 2009 at 11:15 AM