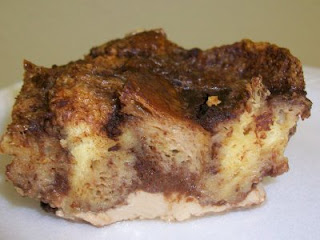 Well, here it is. I finally just decided to throw one picture up and at least post my review. Lauren of Upper East Side Chronicle chose Four Star Chocolate Bread Pudding. I was excited about it -- it sounded very good. It was...interesting. All of my testers agreed that it was good, but they've enjoyed some of the other things I've made more. I concurred. It was good, very rich, but probably not something I'll be rushing to make again anytime soon. I will say that I used challah and it wasn't quite stale, so it didn't soak up as much of the liquid as perhaps it should have. Also, I left the raisins (or cherries) out. I don't know...it wasn't bad, but it wasn't my favorite either!! At any rate, be sure to check out what the other TWD bakers did with this week's recipe (and hopefully I'll be more on time next time!!)

Amanda said…
I really enjoyed this, especially warmed up with chocolate syrup or cream anglaise!
April 27, 2009 at 7:05 AM