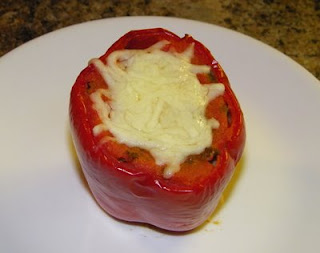 So it seems I've been neglecting my blog lately. I've been neglecting the internet, in general, just getting on here and there to check email! I haven't been cooking much. Well, at least nothing exciting. Plus a sick baby and an exhausted mommy doesn't leave much room for exciting cooking! However, a night "off" on Thursday and a mommy margarita night with a good friend (thank you Christi!!) on Friday helped a lot! :)

So, tonight I worked on a new recipe - stuffed bell peppers. It was something Derek had mentioned a week or so ago, and so I thought tonight would be a good night for it. I started with this recipe as a base, and worked from there. And this is what I wound up with.

Remove the stems and seeds from the peppers. The peppers will need to be softened. This can either be done by boiling them in a large pot of water for 3-5 minutes, or in the microwave. To soften them in the microwave, put them on a plate or large bowl, cover with plastic wrap, and cook 3-4 minutes on high. Set aside.

Preheat the oven to 350'F. Place the olive oil in a large skillet over medium heat. Add the onions, 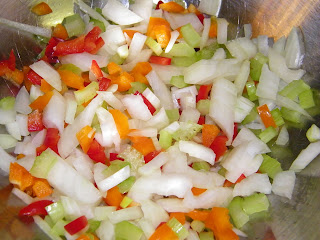 Meanwhile, in a blender or food processer, combine the vegetable mixture and the can of diced tomatoes (with the liquid). Process until smooth*. Reserve one cup of this tomato mixture. Add the rest to a large mixing bowl.

Add the ground beef to the tomato mixture in the mixing bowl. Stir in the Italian herb mix, salt and pepper. Work in the eggs, Parmesan cheese and rice, mixing thoroughly. Spoon the stuffing mixture into the softened bell peppers and place in a baking dish. Spoon the reserved tomato mixture over the filled peppers. Bake for 30 minutes, or until tender and heated through. Sprinkle the mozzarella cheese evenly over the peppers and bake 5 minutes longer, or until melted. 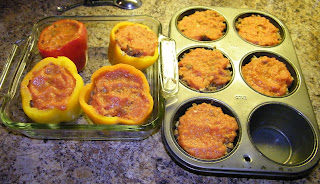 *This is what I did for my non-veggie eating older child. If your family has no problem with chunks of vegetables, then drain the tomatoes, add to the vegetables, and proceed without processing them smooth! You'll just need a cup of tomato sauce to place on top of the peppers.

This was enjoyed by all! Well, Sean ate the stuffing out of one of the peppers. But even that is progress for him, lol. D really liked this, and Kade, we have discovered, is a bell pepper lover!!! I only had 4 bell peppers, so I put the rest of the meat mixture into my giant muffin tins, and I actually got 9 servings instead of 8. I will definitely make this again. The recipe is pretty good as is, although I intended to add some wheat germ in for added nutrition, but forgot until it was in the oven! I also thought some chopped up zucchini would be a good addition to the stuffing mixture. :)

Christi said…
1. That looks soooo good! I have been craving some stuffed peppers myself!