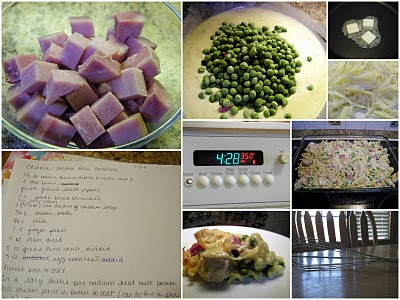 While looking through my notebook, I ran across a recipe that I made oh, about 5 or so years ago. I remember making it. And I remember Sean loving it, which is a miracle considering it has a **shudder** vegetable in it. But I never made it again. I decided why not try it again.
I've never made real Chicken Cordon Bleu, and I honestly think I've only eaten it once or twice, so I can't truly compare this casserole to the real thing. I made some changes to the recipe that I found, and in the recipe I've posted below I've made a few tweaks that I think will make it better. It's not a light recipe by any means, but if your New Year's Resolution was to eat healthier, you could probably make some changes to make it healthier...
It was good, but I probably won't make it often. While D and I liked it, Sean and even Kade just picked at it. Oh well.
Random, but have I mentioned that school starts back today? I am SO ready. ;)
Enjoy!