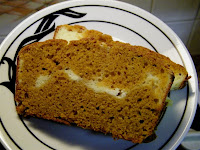 I wouldn't go so far as to say "I'm back!" but I'm getting close. :) It's been a rough few weeks...okay months, and it's just taken the wind out of my sails. But I love baking, especially during the holidays, so I just couldn't stay away.

I stumbled upon a recipe for pumpkin bread on Joy of Baking that I just had to try, and yesterday was the day. Man, it took more energy than I thought it would!! I thought it turned out very well. It was quite moist and had a good taste to it. Toasting the pecans added an extra flavor that I think was worth it. I only added nuts to one of the loaves so the other would be toddler-friendly, and I tasted that one as well -- if you don't like/can't have nuts, you won't miss them if you leave them out!

As I was mixing it, the cream cheese filling was thinner than I expected it to be. I'm not sure if that was due to user error, or if that's just how it is! I did mix it in my mixer instead of a food processor, so that may have had something to do with it. Honestly, I'd like to try the bread without the cream cheese layer and see if it makes a difference in the flavor.

I sent some of the bread to work with D this morning. I received several text messages back that people were requesting the recipe, so I take that as a good sign!!

The original recipe can be found here.