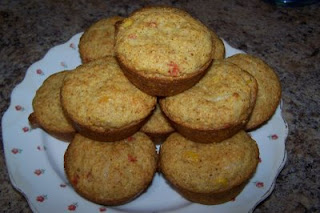 So, this week, our Tuesdays with Dorie recipe is Savory Corn and Pepper Muffins, chosen by Rebecca of Ezra Pound Cake. After I started reading the recipe, I thought "oh, okay, Mexican cornbread" lol. We like to eat it, but I don't usually make it, because Sean loves plain cornbread. I actually just took it out of the oven a little while ago. I've already taste-tested, lol, because I couldn't hardly stand it! They smelled soooo good while they were baking. I only made a couple of changes to the recipe. First, I added a handful of shredded cheese to the batter, and I left out the cilantro (because it never made it in my basket at the grocery store!). I never would have thought to put it in there, but the addition of the chili powder and the freshly cracked black pepper both add a nice flavor to the muffins. Mine turned out very moist and tasty! I'm planning on making either posole or taco soup for supper, and I think these will go quite well with either. I'm sure I'm going to have to make some plain cornbread for Sean, but this recipe will have to make it's way into the regular rotation. :)

Make your way over to the Tuesdays with Dorie site and check out the blogroll to see what the other bakers did with this weeks choice!!

Editing to add the picture, LOL!
Update!! D really liked them, and I think they were even better at room temperature after a few hours (although they were pretty darn good straight out of the hot muffin pan!). Sean would not even try them...he saw the "vegetables!!" in them, and said no. :) I wound up making posole to go with them. I would definitely reccommend trying this recipe!!

Jacque said…
Wow, I'm glad they were well liked at your house.

Christi said…
ummm Yum. Taco Soup is good, I love making Taco soup easy good, something I can cook. Matt said I need to come over and cook with you on Tuesdays. bwhhahahahahaha