January 06, 2009
It's official -- my first Tuesdays with Dorie post! :) What's really cool is that Dorie Greenspan herself, the author of the book we're cooking from, chose today's recipe and even posted on the blog! I had planned on baking on Sunday, but that just didn't happen. I didn't bake yesterday either. So, my tart literally just came out of the oven. I have a confession though -- my tart might be more accurately called a pie. Due to a couple of reasons, I was unable to make the actual tart crust, and I wound up using some pie crust I had in the refrigerator. I did this partly because I don't have a food processor (honey, if you're reading this, I know what I want for my birthday *hint,hint*) but it was also because my 9-month-old helper wasn't being very patient this morning, and I didn't want to push my luck with taking the extra time to make the tart crust. However, I definitely want to try it again sometime when I actually have the time to spend with it.

Anyway, back to the tart. It was actually relatively easy to put together. I used the mixer to make the almond cream (the recipe also calls for a food processor to make the almond cream). It calls for two teaspoons of dark rum. I can't tell you how good that smelled to me this morning, lol. It had me longing for a beach in Jamaica!! I can't wait for this to cool off so I can taste it. :)

I do have a couple of pictures to share. The first is before baking, and the second is when it came out of the oven. Oh, I also used canned pears, and they weren't the prettiest or the biggest, but I think it turned out okay. ;) 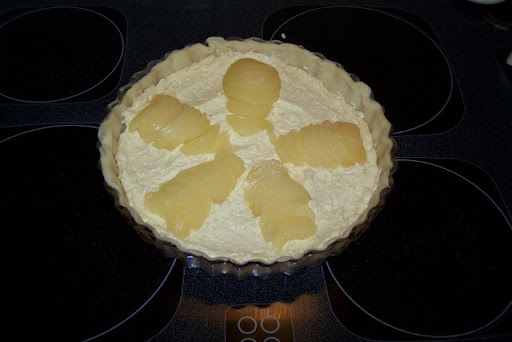 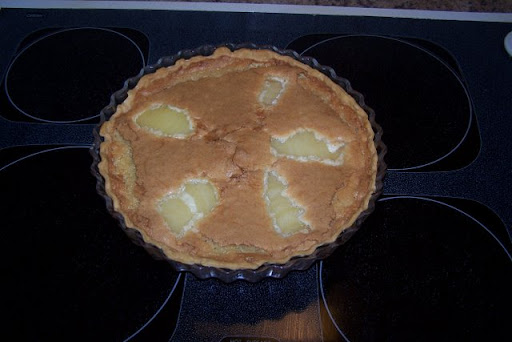 Update: the taste test. YUM! It was good. Very good. I ate one piece, then took the rest to my mom's office. Her boss saw her come out to my car to get it (the baby fell asleep on the way there) and he was waiting for her in the kitchen with a knife. He didn't know what it was, he just knew he wanted some, lol! She called me a few minutes ago and said it was all gone, and everyone was raving about how good it was. I'm definitely going to have to make another one, don't ya think?? :)

Christi said…
That looks so good! My new years resolution is to more like you...cooking, baking. I haven't started out too well. haha!! baby steps, baby steps.

Carmen Cooks said…
I think it looks great! Congrats on your first TWD post, I think it was a great success. And good job improvising with the pie crust; gotta make do with what you've got sometimes!
January 8, 2009 at 11:47 AM

Katy said…
Thanks for all the nice comments everyone! I really do appreciate them.

Bungalow Barbara said…
Welcome! Glad your pear tart was a hit! What a great recipe to start with -- baking along with Dorie herself.