I admit, I love snickerdoodles.  Cinnamon and vanilla?  Yes, please.  What’s funny is that I never really had them much as a kid, just occasionally in the school cafeteria.  I know, ew.


Anyway, snickerdoodles were one of the first cookies that the Munchkin helped make when he was little.  He could help dump everything in the mixer (or “loud noise” as he would call it!) and then it was fun for him to roll the balls of dough in the cinnamon sugar before putting them on the baking sheet. 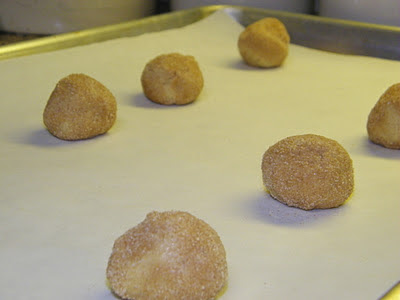 Even since then, my go-to recipe for snickerdoodles has been this one by Emeril.  It’s a great recipe, baking up a thin, crispy cookie (at least when I make them!).


However, I was looking for something different this time, something thicker and chewier.  I found this recipe from the blog How Sweet it Is.  I decided to try it, and while I did keep the ingredient list the same I changed up the method a bit to suit me better.  The result?  What I was looking for – thick and chewy…and great tasting!


I will say that it does not make many cookies, so depending on how many you will be sharing these with, you will probably want to double the recipe. 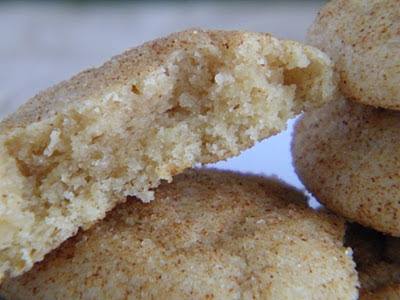 Thick and Chewy Snickerdoodles
Adapted from How Sweet It Is


**additionally, for rolling the dough in before baking, you will need**
¼ cup granulated sugar
1 Tbsp ground cinnamon


Whisk together the flour, salt, baking powder, and cinnamon.  Set aside.

Slowly add in the flour mixture, beating just until incorporated.  The dough will look wet and sticky.  Cover and refrigerate for 30 minutes.

While the dough is refrigerating, preheat the oven to 375’F and line two large baking sheets with parchment paper.

When the dough is ready, mix together the additional ¼ cup sugar and 1 Tbsp cinnamon in a shallow bowl.  Using a #40 disher (about 1” across) scoop the dough into balls and then coat with the cinnamon sugar.  Place on the prepared baking sheet and bake 8-9 minutes or until set.  Remove from oven, allow to cool on baking sheet for 3-4 minutes, then remove to a wire rack to cool completely. 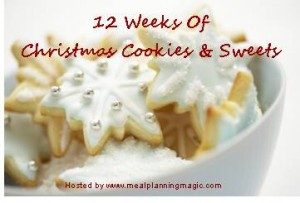 Hey Everyone!  I'm linked up to the 12 Weeks of Christmas Cookies and Sweets over at Meal Planning Magic.  Hop over and see what everyone else has made this week!  :)

sue said…
my hubby loves snicker doodles, but the crispy kind. I don't like crispy cookies so I will try this and see if I can convert him:)
November 17, 2011 at 8:09 AM

kita said…
I wish I could say I loved all snickerdoodles, but the crunchy kind are a no win for me! Its all in the chewy ones and these look like winners!
November 17, 2011 at 3:11 PM

Ashley @ Kitchen Meets Girl said…
My husband's all-time favoite cookie is the snickerdoodle (I enjoy them myself!). These look great!
November 17, 2011 at 5:26 PM

BreAna {Sugar and Spice and All Things Iced} said…
Snickerdoodles were one of my favorite cookies growing up too. We always made them around Christmas time. When I was in college, my roommate made the best snickerdoodles every Tuesday. They always bring back great memories. :)
November 17, 2011 at 6:13 PM

Amilia @justeverydayme said…
These look really tasty! I have to say, I'm not crazy about snickerdoodles (the first time I had them I was so disappointing they didn't taste like snickers) but I have never made them myself. Maybe I'll give them another shot! I love the design of your blog, by the way. The scrapbooking paper and flower are so cute!
November 17, 2011 at 7:12 PM

Trisha said…
Katy, these look super yum. What a lovely addition it will make to a holiday platter!
November 17, 2011 at 9:53 PM

Anonymous said…
Hello! I just tried this recipe last night, and it's great (: I think the cooking time needs to be a tad bit longer. I put them in for about 11 minutes and they were really soft and doughy, even after they cooled. They were still good though but maybe a couple more minutes would've been absolutely perfect :) and also, I think the sugar cinnamon mixture needs a tad bit less cinnamon and it would be perfect! Thanks so much for the recipe <3
September 23, 2012 at 6:03 PM

The Kitchen Kook said…
Mmm. I love how thick these look! And I thought my cookies were thick! I usually use a classic recipe to bake my snickerdoodles, and they still are SUPER soft and chewy (mmm.. I love a good chew!) but I'm definitely going to try this recipe and compare!

Tara said…
Could you subtract the cinnamon/sugar and add chocolate chips and make a chocolate chip cookie? I loved this recipe and the cookies stayed soft for days!
April 22, 2014 at 7:49 PM

Katy said…
Tara, I'm glad you liked them! I think that you could definitely turn these into a chocolate chip cookie. Hmmm...may be my next kitchen experiment! Thank you for commenting!
April 27, 2014 at 11:16 AM