What was I thinking?

June 10, 2010
Tuesday night, it took me two hours to prepare supper. And I've been complaining about it ever since! "Why did it take me two hours? It shouldn't have taken two hours! It's crazy..." My apologies to Christi and D for going on and on about it, lol.

At first glance, it shouldn't have taken that long. Yes, D was getting home late that night. Yes, I had a two-year-old sous chef helping me. 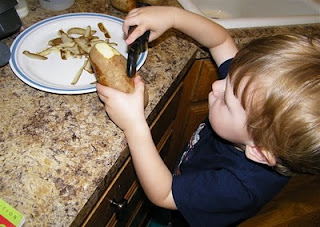 But I was just making chicken strips and oven fries. Both of those are rather easy to fix. Oh wait...that's right...I did decide to fix a new recipe -- cheesy garlic swirly rolls. Oh yeah...and then there was the new cookie recipe I just had to try...maybe that's why it took two hours.

The chicken strips and oven fries were done at about the same time. Which just happened to be the time that the bread was going in the oven, due to poor planning on my part, apparently. By the time the bread was done, I had to stick the chicken back in the oven to heat it back up (hey, at least it stayed crispy!). And it was about this time that I decided to go ahead and whip up the cookies, because surely that wouldn't take long.

But...by the time the food was ready to eat, and the last pan of cookies was going in the oven (the recipe only made 20 cookies) the baby was d-o-n-e done. He was hungry, mad, and definitely telling me about it. So, I scarfed down bites of food here and there while I could, and slipped back into my role of milkmaid.

It was a hectic night, and I pretty much brought it on myself. There are still a few dishes hanging around that need to be cleaned.

Again...what was I thinking?? Oh well, at least all the food was good!

Christi said…
Those cheesy garlic rolls did you in. lol I am glad that you made the cookies, especially since they are my favorite!!
June 10, 2010 at 1:56 PM