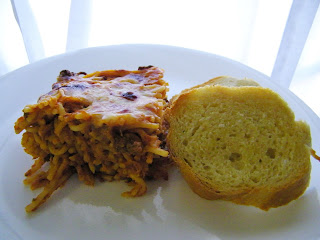 So, I realize that there is a certain restaurant that serves a menu item called "Spasagna" - a cross between spaghetti and lasagna. However, I have never tried it. None of my family has. I'm just throwing that out there...remember it later. :)
I was watching a show on television last week and it featured an Italian restaurant owner that was making a dish that was a spaghetti-lasagna hybrid. I'm not even sure what he called it. But it looked and sounded really good. I went online to search for a recipe, but didn't find one that called to me. Many of them included spinach, and while I would like it and I'm sure Kade would, I know that the others in my household would not. So, I decided to wing it and come up with something on my own.
As I was working on it tonight, Sean kept coming in and asking if supper was ready. Then he asked what we were having. I explained to him that it had all the ingredients of lasagna, but I used spaghetti noodles and mixed it all up. Then I asked him what we should call it. He thought about it for about 5 seconds, and came up with "spasagna". So there you have it. He's never even heard of the dish at the restaurant and he came up with the same name. Of course, it's really not all that hard to put the two words together and come up with spasagna, lol. I just wanted to say that I'm not trying to steal the name, or act like I came up with it all on my own. ;)
Sean's reaction to trying it: "This is good!" and later "I have nothing to say. It's so good, I can't say anything!" and then a thumbs up. I think that means it's a keeper, don't you?
D and I liked it as well. I personally would like to tweak it, because I thought the sauce could actually use a bit more flavor. But overall it was good.
So now, on to the recipe. I regret to say that I failed to take pictures during the process. Can you believe that? I know, I know. Oh well!

Katy said…
Oh! Sorry about that...I'll go back and edit -- thanks for the good eye!! :) I added the ricotta when I added the Romano, Parm, and mozz cheeses!!